Are You In Control | Stop Blaming Yourself

Hopefully, you can see the difference there — in one scenario you are being controlled by the Universe, and in the second, you are in control. This also leads to our discussion of how we make decisions in our lives. Most of us fall somewhere on the spectrum.

The answer to these questions also determines where you believe your “locus of control” is located. Psychologists have found that people will locate a sense of power either inside of themselves, or outside of themselves.

The locus of control refers to the extent with which people believe they have power over events in their lives, and the way that they cope with changes. This also dictates their reactions to life events, making it not just a psychological theory, but a highly relevant factor in our our overall satisfaction with our lives.

Digging Deeper in the Locus of Control

As I begin to dig deeper into this explanation, keep in mind that my theories are scientifically based, so these are the actual studies undertaken by experts in the study of the human mind.

The classic example of the locus of control is someone who fails a math test.

If this person has an internal locus of control they would frame the bad grade as the result of not studying hard enough, or not being smart enough – in short, they blame themselves.

With an external locus of control the person would blame the teacher for not having explained the concepts well enough, or someone who kept them from concentrating harder on their studies.

How to Control Your Locus

And as we all know, self-blame can lead to a downward spiral. Generally people with an internal locus of control are more likely to take responsibility for their actions. However, this become a problem when they beat themselves up and don’t let go of their mistakes.

Locus of control, then, is a continuum. No one has a 100 percent external or internal locus of control. Instead, most people lie somewhere on the continuum between the two extremes.

Here’s my challenge to you: recognize where you fall on the spectrum. Try to correct yourself when you are falling too far to one side or the other. Are you able to say, “This is my fault,” or do you always blame others?

Likewise, do you pretend that sometimes the Universe is to blame when, really, you should have worked harder to make something happen in your life? For example, I got stuck in traffic for a reason, vs. I should have left 10 minutes earlier for my job interview.

As you become self-aware of the choices that you have made in your life that lead you to where you are, you will also become more aware of your personal behaviors which you may need to correct in order to lead a happier, healthier, more balanced life. 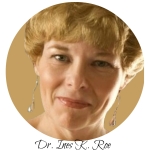 Dr. Ines K. Roe has been helping women in transition rediscover themselves for over 20 years. If you’ve  been feeling unfulfilled, are frustrated with your sense of accomplishment in midlife, or simply need guidance on your path to holistic well being, join her ecourses.